SEX, LIES AND ABUSE IN SHAMBHALA

SEX, LIES AND ABUSE IN SHAMBHALA

August 22, 2018 Posted by Christine A. Chandler No Comments

Recently, I have been receiving comments on my last post,  Divide and Conquer.    The Divide and Conquer was successful in certain ‘in-house’ enabling groups and now they are commenting on my article; attempting to impugn the CAT story author. I don’t let those comments through.  I choose to believe whistle blowers, even when they are still influenced by their ‘friends’ in the cult.

The usual ‘crazy neurotic woman’ or ‘paranoid conspiracy theorist’ or  ‘unstable angry person’  and ‘right-wing fundamentalist Christian’ attacks against the whistle blowers, even getting them to turn;  is a real coupe for these decades-long enablers; who include those ‘establishment Tibetan Buddhist minor journalists’ who are also Tibetan ‘Buddhists’ and still following another lama and/or  wanting to protect Tibetan Lamaism and the Dalai Lama. They are the ones that are controlling both the mainstream voice and the voice in these magazines for other non-Tibetan Buddhists, who believe they are ‘independent’ views.

In other words, the usual Establishment Tantric Buddhist ‘journalistic’ Swamp that have enabled the sexual abuse of these Tibetan lamas;  for decades. Most people don’t know that these ‘journalists’ have also taken vows in their Tibetan Lamaist cults, to ‘obey their own Lama gurus’ and keep their secrets, too.  Who want their cake and eat it too:  be still  members of Tantra, and the heroic voice of the #metoo feminist movement.  A Double Bind for the public this time.  One way you can spot who they are?  They make nasty comments about  real whistle-blowers on every Buddhist and non-Buddhist site, blog and so-called ‘Open Buddhist’ site they can.  No pretense of  their mindful ‘non-judgmental’ attitudes,  now.

Tibetan Lamaism is big business for lots of Western folks in the Tantric world, and it is  now tied to wealthy billionaires; both East and West. So they are  getting ahead of the story and controlling the current narrative, and smearing the real whistle blowers on this whole stinking mess of Lamaism, because they have been complicit for so long.

The important thing,  for these enablers, is that no one sees that ‘overarching and well-coordinated’ collusion of the Tibetan Lamas and their New Age network; spreading Tantric influences all over Western countries and making them crazy.

The question should be not about the mental state of the whistle-blowers but :  “What about the mental state of all the parents in this Shambhala Tantric group, that let  their own children be sexually groomed, their fellow cult members be sexually exploited on a massive scale,  and their leader keep a harem of seven wives, illegally, while his Regent infected his students with AIDS, one of them dies,  and they never even think to  go to the police?  Who  remain in these Lamaist groups and still see their Lama gurus, as ‘perfect without mistakes.” What kind of group mental state is THAT?

That is the question that should be asked, now.

Of course there are very few victims in these cults coming forward and ‘corroborating’ the stories of whistle-blowers with  the legal authorities and the police. The inner circle of Trungpa’s who were there, ( and this goes for the inner circle of all these Tantric Lamas)  during the most ‘secret part’ of   Tantric teachings on ‘no good-no bad’; his most deeply cult-controlled members, who formally vowed to him and the group  to  ‘never reveal the secrets of the Vajrayana or may I shrink up and rot” are not going to come forward, but instead are going to do everything in their power to continue to confuse and double-bind its membership.  And the public.

I took that vow; they all take that vow,  to not reveal the secrets, and unless  other brave souls tells the truth,  which is now unlikely, this requires an outside, investigation at the level of what is happening with the Catholic Church,  whose members are clearly not as mentally disturbed nor as cult-controlled as those in  these guru-worshiping groups, like Shambhala International.

THAT is the big difference between the sexual abuse in the Catholic Church and in these Tibetan Lamaist cults like Shambhala.  The Catholics actually go to the police.

My articles and my book ( and an army of these enablers of Tantra don’t want you to read it!) are very much about how these Tibetan Lamas ALWAYS are let off the hook, because of their very large, western-colluding, enabling system;  that always surrounds them.  Bigger than just their own overarching Tibetan Lamaist hierarchy of control.

They were allowed to become a ‘Buddhist’ mega church that has now enfolded the other Buddhist streams into their net of influence because of Buddhist groups, like Zen and Theravada, and their own  collusion with the mindfulness movement.   A mega-billion, now corporate movement ‘too big to fail’  simply because of the egregious abuses of its founder, ChogyamTrungpa,  and his son, Mipham, and many of his inner circle.

The much bigger question is why the very well-documented, sexual grooming of young girls,  sexual abuse of women, and illegal harem keeping of women, in not one, but two of the major Tibetan ‘Buddhist’ centers, Lama Sogyal of Rigpa,  and now Trungpa’s group, Shambhala/ Vajradhatu,  have been allowed off the hook and then off  the radar again and again,  while the Catholic Church is being destroyed in the press.  Who is now controlling the press is the second question that should be asked.  Granted, their own  Catholic Church sexual abuses are abhorrent, but not written into and justified by the Vajrayana Tantric Teachings themselves.   And, the Catholics are demanding criminal action. And, getting constant press coverage in major newspapers.

Why are Lamaist and Hindu guru groups of Tantric Vajrayana, the new, falsely-named ‘secular religion for the modern age’ replacement  for Judaeo-Christianity, they hope,  being allowed to handle their ‘institutionalized’ abuse in-house, AGAIN?

That is the question uppermost in my mind these days.

Objet : How Did It Happen: Response to Dzongsar, Responding[...] 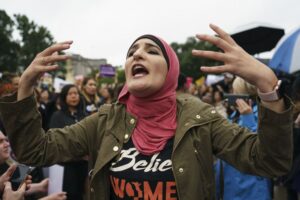 Lama Sogyal's Rigpa group, like all the Tibetan Lamas, have been busy in China. The Communist party always rewards their best Lama agents.  Sogyal showed them what could be achieved with Tibetan Lamaist Tantra, particularly in dumbing women down. It would make them not even notice who was leading their women's' marches or that they had put pink pussy hats on their head to protest gender stereotyping and sexual abuse.