The Dalai Lama and NXIVM

The Dalai Lama and NXIVM

Raniere got the Dalai Lama’s endorsement, not just because of the $1 million plus exchanged, but because Keith was on board the Lamaist Misogynist Train in the West, here to nail all female energy down for their own uses.

Just like Raniere did inside his cult group, NXIVM.

Some Dalai Lama favorite lamas have kept harems, like Trungpa and Lama Sogyal.  Still being protected by the U.S. media and Sogyal’s Rigpa sites still endorsed by the Dalai Lama in the U.S.

A link and a comment below, to show how despotic the Dalai Lama and his fanatic devotees are in controlling the free speech of his Tibetans in exile in India and now in the U.S.;  as well as the speech of western ex-Tibetan Lamaists who dare to criticize the Dalai Lama.

Shaming and threats, ad hominem attacks, are part of the arsenal of crushing all free speech inside cult groups. Like Lamaism and NXIVM. Birds of a feather.  NXIVM is just a fledgling. A spin-off, if you will. There are thousands of them now. Crazy from Tantra’s spread.

Not only free speech, but freedom of thought is curbed in Lamaism’s net of Tantra; whether done by fanatic Tibetan devotees, or Western Tibetan Buddhists with Ph.D.’s.

The Dalai Lama never lets go of his mental slaves, east or west. Lamas do not have to brand their women, physically. Just thought-control their minds;  have them take oaths of fealty and secret vows; double-bind them; make them feel ‘special’ (like Keith did) and put the fear of hell-realms and hate-mongering by the groupthink, their kind vajra brothers, and sisters,  if they reveal the lamas’ secrets or criticize their groups.

Shaming is a tactic of fascists, totalitarian groups, cults, and despotic religions. Like NXIVM and Lamaism.

Any Tibetan who tries to break free of the iron grip of Lamaism and the Dalai Lama can expect similar or much worse treatment by those still under the Dalai Lama spell.  Now that China is on board with Lamaism, again, in their post-Maoist phase,  it will only get worse for all of China’s population.

I also received a comment post by mail, at my website, from a Tibetan woman in India, attacked on social media for questioning why Nancy Pelosi and Richard Gere are involved in their government in exile.

“I am Tibetan, I wanna know more about Richard Gere and Nancy Pelosi. I raised my opinion against them on social media. The Tibetan Parliament stood up against me by trying to make my Tibetan community stand up against me. I need your expertise! Thank you!  ”

I wrote her back, but she never answered.

This friend sent me a video of another Tibetan woman critical of the Dalai Lama and what is said about her:

This woman, who criticizes the Dalai Lama and says: his brain is empty. “Dalai Lama Brain is empty, thinks a Tibetan woman 2018“.   I do not understand what she is saying because it is in Tibetan.

But very interesting is the first commentary:

“Who’s that woman? Must be a chinese spy. Good-hearted Tibetans are looking to kidnap her, and kill her for Tibetan cause. Thumbs up! Truth will prevail. Fuck you, aunty.“

The video has since been taken down.

Interesting that it is Tibetan women and western women both speaking out against the Dalai Lama and his Lamaist iron grip.

Women I have known, both from Tibet and here in the U.S.,  are very feisty. Despite being told they can only be enlightened in a male body in their future life. If they pray to their lamas to be reborn a man.

They are particularly lucky to receive the ‘special blessings of their lamas’ as the lamas’ sexual consorts in this one. That is what the lamas tell all the women inside their sanghas. East or West.  Hmmm. Might these feisty Tibetan women and the western women join forces. and speak out together? 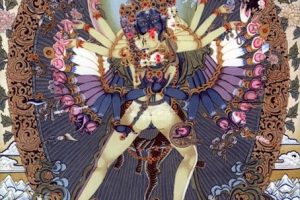 Chakrasamvara in Consort with Female Deity to use her ‘essence’[...]