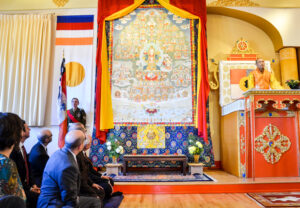 I know that Canada has gone somewhat mad, since Trungpa moved his harem-keeping, cult, and his army of the most fanatic devotees, with make-believe medals on their British-style Colonial uniforms to Halifax,, after his leadership-style was reported by  the U.S media in  The Nation in 1980.

When 10 years later, his AIDS-infecting Regent was featured in The New York Times, the rest of the obedient members, hightailed it to Canada, later changing its public name from Vajradhatu to Shambhala International, to declare its global ambitions and to avoid lawsuits after at least one young dharma brat died; after contracting the deadly disease from his guru. All the cult members were taught to believe ,by their gurus, that the magic practices of Tantra would protect both him and the hundreds of heterosexual students he seduced into unprotected sex  to prove their devotion to him. Besides, AIDS doesn’t exist. Not to these experts and  ‘researchers’ on the ‘scientific’  benefits of mindfulness. They are taught that facts don’t exist and reason must be abandoned to reach the higher consciousness of Shambhala Enlightened Warriorship.

Having Justin Trudeau as Prime Minister has probably not helped Canada, much,  but it sure has  helped the cult of Shambhala International, since Justin seems to live in a permanent state of make-believe, himself.

But I didn’t think the military in Canada could be this fooled. Maybe they are only being ‘nice.’  But do they know the roots of this mindfulness? That is comes from a guru-worshiping cult who felt they would be safer in Nova Scotia; which Trungpa described as possessing  a bigger dose of ‘primordial ignorance?’ Meaning not paying attention as much with  your rational mind.  Therefore, a  better place to secretly work on infiltrating into every cultural aspect of our western civilization, thus  able to slowly undermine the western reason and ethics in our democratic societies,  to be able to overturn it?  Does Canada yet know that Trungpa’s members all take vows to their Asian gurus to ‘perpetuate’ their Tantric, occult medieval world?

Does Canada have an intelligence community actually doing intelligence work anymore?  Does North America? Does anyplace in the West?   Or are these high-placed government employees all doing mindfulness these days;  all learning ‘not to judge?’

Had the first-response team,  in Florida, whose leadership couldn’t decide whether to go into that school shooting in Broward County, to save those children,  been doing mindfulness?  Police departments in Florida, and throughout the United States,  have integrated mindfulness in their training, brought to them by mindfulness trainers and  cult devotees of Tibetan Tantra, who are taught that facts and hard science should be replaced with scientism and feelings. That facts don’t really exist. Yet, they are taking the word of these guru-worshipers of Tantra,  that mindfulness will be the panacea for all the world’s sins.

Hesitation is what mindfulness eventually creates. Then cowardice, and fear of speaking outside the herd-mentality. BIG MIND is what mindfulness will create. In order to become unable to do what is right, ,BIG MIND will determine how to act, and speak.

China must be so please.

Now that Trungpa’s make-believe army, his seemingly silly, but dead-serious, make-believe military Vajra Guard,  originally Trungpa’s bodyguards, but now his ‘change agents to change the world,’ to 1230 A.D., have made inroads into the Canadian Military with its ‘mindfulness’ techniques’ and anti-democratic views.

Surely this can’t be true?  That Canada is this far down the rabbit hole of Trungpa’s ‘crazy wisdom’ influence?  That its military is listening to second-generation members of a medieval, misogynistic cult,  pretending to be  ‘secular’ ecumenical, and the ‘future of the world.”

A cult group whose leader kept a harem of his favorite sexual consorts, and his ‘advanced students’ in a mindfulness trance, that creates so much confusion, hesitation and ‘non-judgmentalness, over time, that the parents in these groups aren’t able to protect their own children from abuse, and themselves from  this exploitation.  In fact, the one thing that goes, with too much mindfulness, is the ability to decide a correct course of action in life and death and survival situations.

The arrogance of this Shambhala group is  still quite mind-boggling. But more unbelievable is that Canada is taking them seriously enough to even considered entertaining their advice on military view, strategy and tactics,  instead of  investigating  and prosecuting them for being a cult of organized abuse.

Is it politically incorrect  to let Canada and the United States know that  Shambhala International,  advising the Canadian military, is part of the Karma Kagyu sect lineage of  Tibetan lamas, headed by the 17th Chinese Karmapa; a sect realigned and promoted these days by the  “State Administration for Religious Affairs (SARA), part of the State Council (the Government), and on the other hand, the United Front Work Department (United Front), one of the four main bodies of the Central Committee of the CPC?”

For the Shambhala member’s advice and report to the Canadian Military see:

Update:
An update from a reader who posted this recently to inform me that  cult members of Shambhala, and members of their faux-military, are hoping to wheedle their way into the Canadian Military giving advice.  This was a YouTube video, that was subsequently taken down:”

” I’m Carolyn K….., I’m a business executive and I’ve been a Shambhala practitioner for over 30 years, I’ve made a leap recently into working in a high tech company that interfaces between the military and large defence contractors and I’ve brought the view of basic goodness and the trust in the goodness of society right into the negotiations and contracting work that we do on some very challenging war fighter focused programs and the result of that has been that our company, ah, has been welcomed in to the situation in a way that people feel they appreciate our understanding of them and that we are not looking at them as aggressors but rather as people who are actually trying protect the people who defend this country so that has been recognized as a diferencial and has been good for our business too.”

Shastris are titles the Sakyong King, of the Imaginary Kingdom of Cult Shambhala, gives to those, who are the most fanatic change agents in the social/political realm, obeying  Trungpa’s command to ‘save the world’ with his enlightened dictatorship of  Shambhala teachings.

These inner circle cult members believe they are actually affecting a situation. Even though this is  just another  public relationship stunt so their membership will believe their guru’s Shambhala Enlightened Society and its delusional ‘elders’ are actually penetrating into the military.

Can silly be dangerous?  Can the ‘Mouse that Roared”–the  Shambhala administration-who abuse  their membership,  be given a voice in the Canadian military?

24 thoughts on “The Cult of Trungpa’s Shambhala Integrating into Canadian Military?”