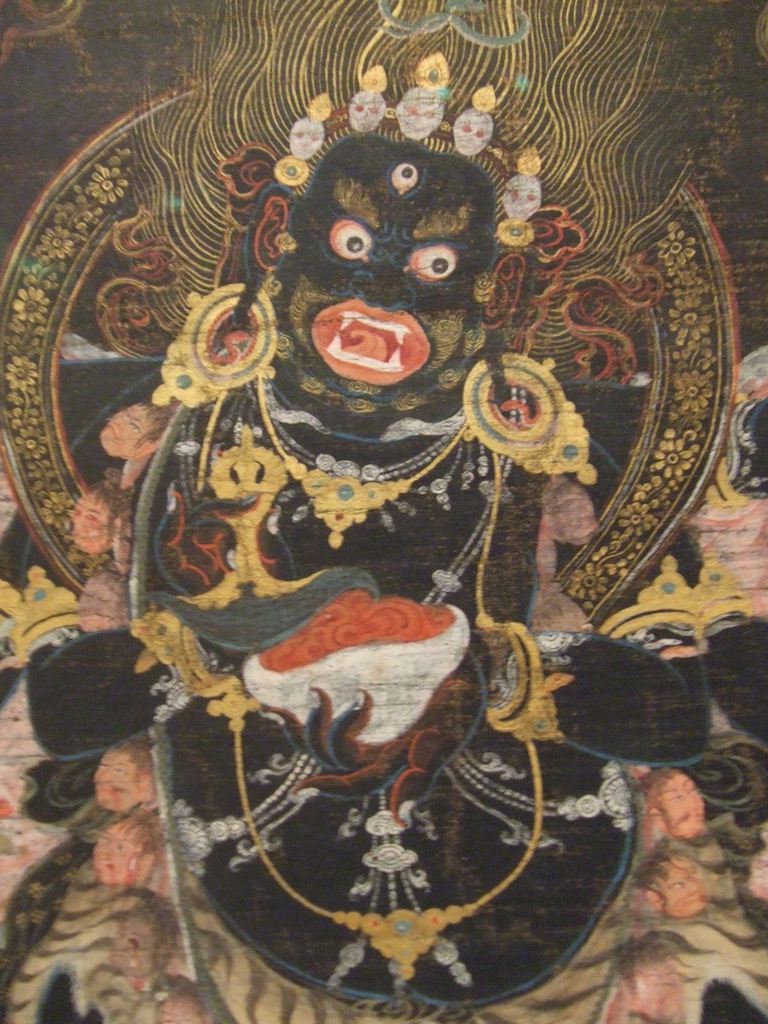 HGW: Christine, you have been an active member of Shambhala for more than three decades before undergoing the profound change from an ardent practitioner to deep critic of Tibetan Tantrism. Was this transformation the result of a key moment or rather an accumulation of experiences reshaping your mind?

CC: My journey of becoming an ardent practitioner was quick. As it was for so many in the soft science professions: the psychologists, teachers, social workers, and artists that Trungpa had targeted through Naropa Institute’s ‘contemplative psychology’ and his other ‘academic’ programs that hooked people into Tibetan Lama guru worship. First, by pacifying us with days-long and a month-long Hinayana retreat and teachings, then inculcating us further with Mahayana teachings twisted into a “saving the world” as Buddhist bodhisattvas.

HGW: But then you looked thoroughly behind the thangkas…

CC: Right, when the realization really dawned on me, seemingly all at once, that I had been in a cult with 8thcentury Warlords worshipping each other and expecting us to do the same thing?  That happened because all the repressed and denied realities I was experiencing and observing, of their physical, financial and sexual abuses, kept breaking through my own defenses and being told repeatedly that what we were perceiving, with our own eyes, was just ‘conceptual reality;’ ‘dualistic reality; told was ‘just a dream;’ an ‘illusion.’

HGW: Over many years you also had access to the inner circle of Shambala.

CC: Yes, the penetration of actual reality, for me, became just too sharp and clear, because I had a front row seat to the backstage of so many of these Lamas and their inner circles . It got to be too much to be ignored and filed away, anymore.

HGW: What reactions did you get after publishing your book, both from the public, and from your former companions?

CC:  The public reaction to my book at first was very good, as the inner circle of Trungpa students did what they always do: they ignored ‘heretics’ publicly as they were calling me. I was creating a cognitive dissonance that couldn’t be tolerated or allowed, after they all collaborated in making the Dalai Lama a Saint.  And, then they came in for the kill.  Particularly the ‘contemplative psychologists’ from Naropa who trashed my book, called me a ‘right wing Christian’.

HGW: Did you ever expect to have a bearing on your former companions?

CC: They were probably not reachable; they were programmed to see the Lamas’ abuses as ‘blessings.”  A classic group double-bind that that said their perceptions were too clouded by past evil deeds (using the Mahayana teachings) to see reality, correctly. Only the Lamas and their inner circles saw reality correctly.

HGW: I can imagine that departing from religious convictions that have shaped half of a lifetime and saying farewell to friends with whom one shares a whole biography is a complicated process. What gave you the strength to follow your personal convictions against all odds?

CC: Yes, it was very painful and sad. But, that energy that made me passionate about reporting sexual abuse, going into dangerous situations to try and help children in crazy sociopathic, often sexually abusive adult situations, came back to me. That’s how I coped. Now, I cope by feeling I have said what I could. I have done what I could. I have no regrets.

HGW: It seems to me that you pull Buddhism completely to pieces. Is there anything left from your former Buddhist convictions today?

CC: Although I did not revert to Catholicism, I think those early values of not stealing, not lying, not killing, not coveting another’s possessions, or rejecting sexual promiscuity (which Tantra throws to the wind in its “Law of Inversion,” that social mores should be broken to reach a non-duality state) kicked back in. These values were deeply rooted in my being, and more important, in the long run. My ethics were still intact.  I have to say, my month-long retreat taking Buddhist Vinaya vows, early in my Buddhist career, made me go granular into the ethics that exist in traditional Buddhism. It had a profound effect, that stayed with me.

HGW: In the preface to your book “Enthralled-the Guru Cult of Tibetan Buddhism” you classify Shambhala “a cult of Tibetan Lamaism that calls itself ‘Buddhism’.” So again: What is your stance towards Buddhism as a whole, today?

CC: Buddhists, in general, seem to be too prone to be augmenting group conformity to the State, when practiced in groups. And look what it does to women, when a nation embraces Buddhism as the national religion?  Look at Bhutan, where women were purposely not educated beyond the 4th grade, until recently, when the world ‘s microscope looked at the boys abused in Bhutanese monasteries. No freedom of speech allowed. It was all the Buddhist and Hindu and New Age groups working together to repress our free speech in Crestone Baca Lama Land.  I would never forget that: how easy they conformed to becoming tyrannical about free speech.

HGW:  What is your prediction for the future of (Tibetan) Buddhism in the West?

CC: I see it expanding, for a while. But, in the long run, Tibetan Buddhism is incompatible with the ethics and values of Western culture, its Laws and Constitutional Bill of Rights.  It is a guru-worshipping cult. That is what Tibetan Lamaism is, has always been, and always will be, according to its own teachings. Whether it is done in small groups, such as in Milarepa days, or in mass movements in Asian Countries.  Or, in the West for the last fifty years, in a big way.

HGW:  I have got the impression that most what you say about Buddhism is shaped by your former Vajrayana experience. But today, there is a broad variety of Buddhist activities in the West, ranging from Rainbow Buddhists to Buddhism as a wellness cult; we see a growing number of environmental activists relying on mindfulness and compassion, and there are even such things as Buddhist Economics developing an alternative concept of a future economy no longer based von greed and exploitation. I doubt that this all is result of manipulation by some Tibetan lamas, or an expression of an atavistic world view, and why incompatible with western values?

CC: Buddhism was always about seeing clearly for me.  Vajrayana ‘Buddhists’, however, are the most popular of the major Buddhist groups now, and are spearheading a Three -Stream-Buddhism through the Mind and Life Institute of the Dalai Lama. This Buddhist Economy paradigm is the Old Tibet Lhasa model, reworked for the 21st century; our permanent serfdom in ‘equity’ (everyone poor but a few), like in Old Tibet and all Totalitarian models. Only this one planned has a religious component. “Mindfulness” is its recruiting hook and technique to make people comply. The World Economic Forum, where the 14th Dalai Lama, former slave-owner and overseer of two million permanent serfs, has a position of honor and approves.

HGW: Hmm, do you have a final message to the western Buddhist communities?

CC:  This article is my message to the other communities.  And, that spiritual paths should be private, and not done in groups. At the least, separate yourselves from Tantra’s seductive trap that is not what the Buddha taught. Keep your hand touching the earth.

HGW: Thank you very much for this interview, Christine.

Christine A Chandler, M.A., C.A.G.S., had been working as a licensed social worker and school psychologist, specializing in the area of physical and sexual abuse in families. Her experience of living and studying inside Shambala for nearly 30 years gave her an intimate view into this fraction of Tibetan Buddhism. In 2017 she published “Enthralled – The Guru Cult of Tibetan Buddhism”, a book in which she delivered a profound analysis of the Tibetan Tantric tradition. Today she is happy to be doing the Western mindfulness practices of playing the piano again, sailing and boating, running with her black lab, and just enjoying the rest of her life with her fellow escapee and husband – “a life without any backward regrets”, as she states it.